The new Episcopal church at Cordova, which will be consecrated by Bishop Rowe on Easter Sunday, is the outgrowth of ten years of activity in the local field of the missionary society of the Episcopal church.

During the summer of 1908, Rev. E.P. Newton, D.D. under authority of Bishop Rowe and during construction days of the Copper River and Northwestern railway, established the Red Dragon Club house, designed to provide a social home of those men, who without family ties in Alaska, had been called by the lure of the North and the hope of gain and adventure and who found the open saloon and gambling house the only place where they could m 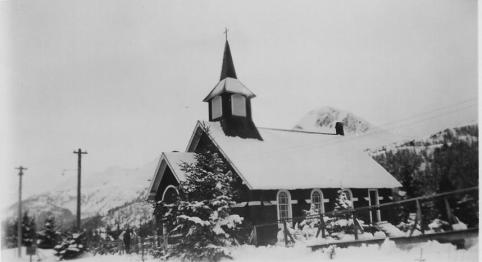 eet their fellows. The Red Dragon was enthusiastically received by hundreds of men…… The wide reputation gained by the Red Dragon is shown by illustrated articles in national weeklies such as Colliers, Literary Digest, etc.

E.P. Ziegler, the present priest in charge, has recently completed his tenth year at Cordova and to him great credit is due for the construction of the church, the outgrowth of his ministry. Rev. Ziegler’s work has been varied. In early days, when no suitable buildings were to be had at construction camps and towns along the railroad, services were held in saloons, pool halls and sometimes in the open air with several hundred interested auditors. During the past year the Red Dragon Club House has been used as the headquarters for the Red Cross……

…The church is of English architecture, the plan of the present priest in charge and was constructed by Mr. Bartley Howard to whom credit is due for his workmanlike execution of the plans….. Two bronze-tablets mounted on oak will be installed upon their arrival from the states, also a memorial to M.J. Heney, who willed to Bishop Rowe, ten thousand dollars for the work fo the Episcopal church among the natives of the interior…..

Taken as a whole the new chapel is a credit to the people who have so generously contributed to make its construction possible as well as to Bishop Rowe and to the Rev. E.P. Zielger and to the town of Cordova.

Late 1920’s—Prof. WF Parish led a Drama Class, opening The Little Theater in the Red Dragon. Their first performance was in June 1927.

Miscellaneous notes about this decade
June 11, 1925—The Red Dragon begins official service as Cordova’s Library. Open two afternoons each week, the average attendance is reported at 20 at “the dullest time of the year.”

Rev. Leicaster Kent and his wife, Beulah, arrived shortly thereafter and were a bundle of energy. Their activities helped the church school grow to about 68 children the spring of 1926, as well as other forums, such as one held every two weeks, at St. George’s to discuss “perplexing problems of the Christian life and life in general.”

It was during Kent’s time that a baptismal font was made of Alaskan ash and is still used today.

From the Cordova Daily Times, Dec. 10, 1925
RADIO STATION PLANNED FOR LOCAL CHURCH
Sermons and Programs
To Be Broadcasted If Project Carries
Half of the funds necessary to install a radio broadcasting station in Cordova have been raised by St. George’s church and the parish next year will be able to enjoy sermons and programs through their receiving sets. The town is soon to be put on the radio map.
Rev. L.F. Kent, in announcing the project today, explained that the funds thus far have been contributed entirely by the Women’s Auxiliary in cities outside and no soliciting was done, the gifts of cash being made voluntarily. The idea was originated by the rector on account of the difficulty in getting over his parish, which extends as far as Latouche, Copper Center and Katalla. To cover these points once a month would mean that he would be away from Cordova at least half of the time.

Installation of a fairly high power sending outfit, however, will bring the church to these remote settlements, as well as to fox islanders, army and navy stations. If the experiment is successful it may be the means of securing more broadcasting equipment for other portions of Alaska.
The present plan is to send out the Sunday morning service and evening song, also during the middle of the week to broadcast a program of music and other features prepared entirely by local talent. On occasions when distinguished visitors, such as the governor, congressmen or others, are passing through Cordova they would be requested to address the radio audience.

In order to house the equipment a small building will be erected between St. George’s and the Red Dragon and aerials will be strung between the two buildings…..

Rev. Kent is hoping that in February or March it will be possible to initiate the project. Lieutenant W. A. Tattersall, in charge of radio stations in Alaska for the navy, has been much interested in the enterprise and says that the interference which has bothered people here attempting to hear programs from outside will not be noticeable in the reception from the proposed local station. 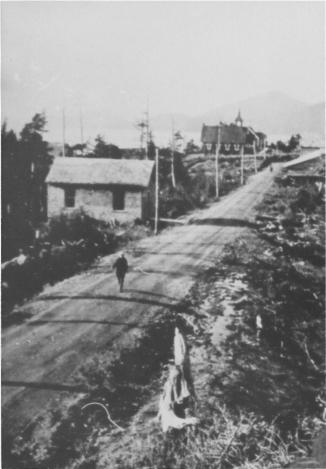 Priests in charge during this decade
1909-1924—Rev. E.P. Ziegler—
with absences in 1914, to attend Berkeley Divinity School (he was ordained in 1916 in Juneau), and
in 1920, a furlough to study at Yale Univ. School of Art.
In 1922, Ziegler became editor of the Alaska Churchman, a monthly publication which continued through 1925 based out of the Red Dragon.